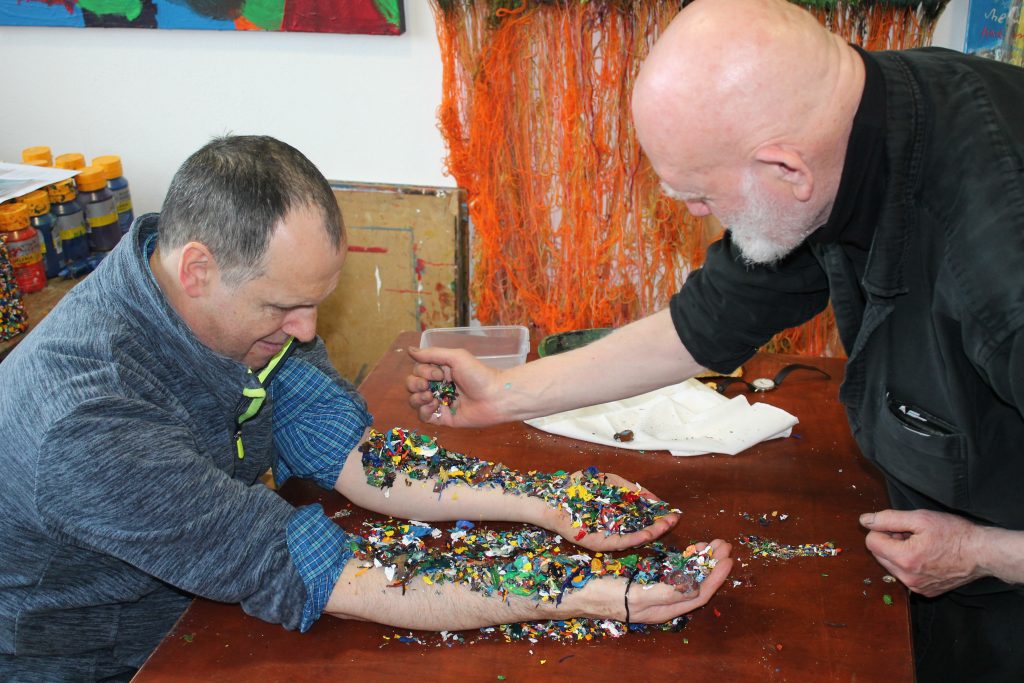 Declan Byrne and Alastair MacLennan engaging and collaborating in the KCAT Studio, 2015.

The Engagement project began in 2014 when we invited artists to join the Studio at KCAT at an open day to share ways of working and to begin a relationship between artists from all over the country and the studio artists in Callan. We had no prescribed outcomes in mind, and so the outcomes have been exciting and fascinating to watch. What emerged was a sharing of ideas, creativity, openness and a tremendous amount of respect as a series of relationships between the visitors and the host artists began to grow. These relationships were based on verbal and non-verbal communication, mutual observation and a sense that, whatever about developing as artists we were all growing as people, more aware of different ways of being and creating in the world, more confident, more questioning of assumed values, and standards in the arts. (Catherine Marshall (2019) Curator; Engagement Project) 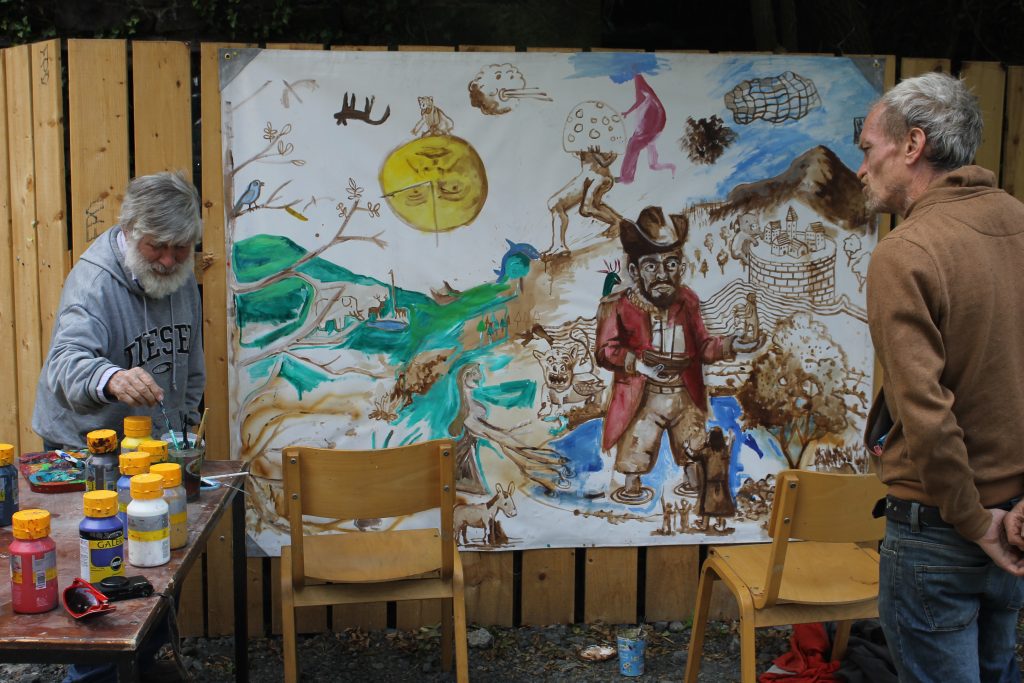 Andrew Pike and Nevan Lahart working on a collaborative painting.

A core aim of the project is to continue exhibiting, including national institutions, galleries and museums, in order to reach large audiences and open the mainstream Irish art to artists who take a different path than the typical professional artistic career path. There is a need more than ever, particularly for the publicly-funded art infrastructure, to acknowledge and be more representational of the diversity of the artistic practices that exist in Ireland.

However, the context remains fraught with perceptions of unpredictability and our experience is that sometimes fear and lack of understanding within some organisations results in a steer clear approach. Some simply don’t feel they know where to start or feel the confidence to stand by the work of artists, who are often out of view, of the fixed focus, of the odd star gazing curator. Of course, not all artists have a right to be chosen every time, but they do have the right to be encouraged and considered equally within a broader perspective, that reflects the ever-changing and emerging diversity that exists in Irish culture. The Engagement Project, driven by the artists at KCAT through their long track record and dedicated commitment to their professional practice, will continue to engage with all parties involved, ask important new questions and open the debate to a wider audience. Beauty may be skin-deep, but inclusion is in your marrow (Declan Kennedy, Arts Facilitator and KCAT Studio Coordinator). 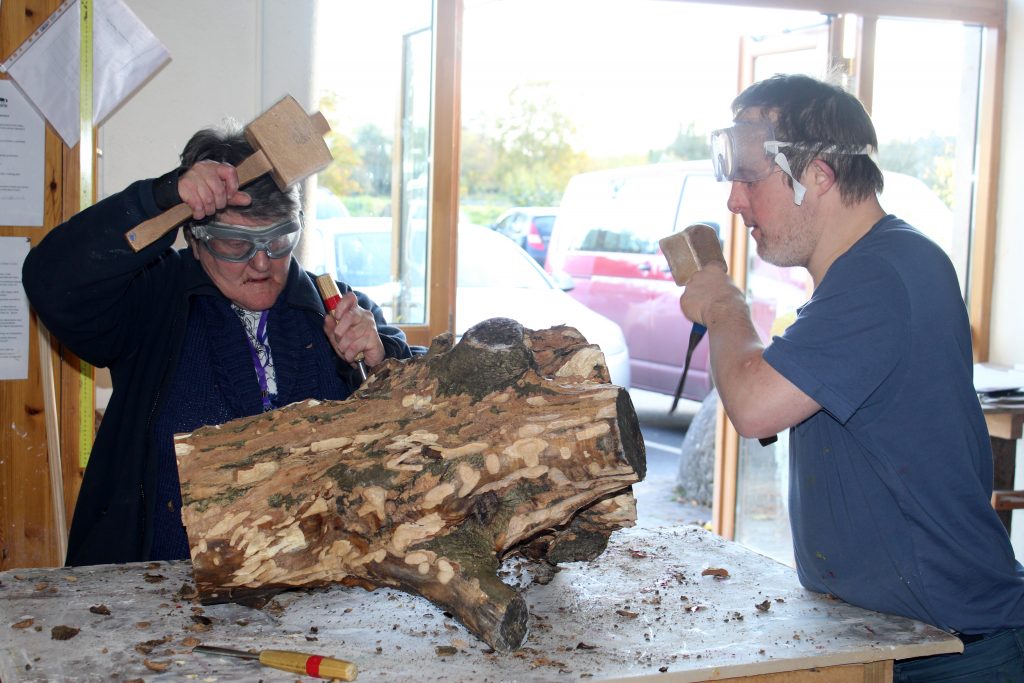 A few words to sum up how you have found the collaborative process?
Very good. We had great craic, learning new techniques in Hessian sculptures. Anna came to KCAT to visit me and then I went up to Sligo to her studio. We are working on a collaborative textile work and are sending each other back and forth pieces of work.

Are you aware of any influence on your own creativity the engagement process might have had?
I was already interested in textile pieces but I hadn’t been working extensively until I met Anna. Before I was mixing paint and threads.

Together Now: The Engagement Exhibition

Together Now: The Engagement Project is a large group exhibition of painting, drawing, installation, sculpture and film by artists from the Kilkenny Collective for Arts Talent (KCAT), in Callan, Co. Kilkenny and artists from very different practice contexts from all over Ireland, who have been working together in residencies and other forms of engagement since 2014. Curated by Catherine Marshall, and following a symposium at KCAT in Callan at the end of 2018, this exhibition, drawing on the work of the 24 artists, is touring to venues across Ireland.

Launched in June 2019 at Uillinn: West Cork Arts Centre, Together Now will travel next to the OPW galleries at Farmleigh, before travelling to the Linenhall Arts Centre, Castlebar, Ballinglen Art Foundation and Ballina Arts Centre and the F.E. McWilliam Gallery in Banbridge, finishing back at the KCAT Arts Centre, Callan, Co. Kilkenny.

The work on show has been made as a result of collaborations and conversations between the artists from KCAT and artists who prioritise social engagement, performance, installation and a variety of media from film and video to very un-traditional interpretations of traditional media such as painting and sculpture. 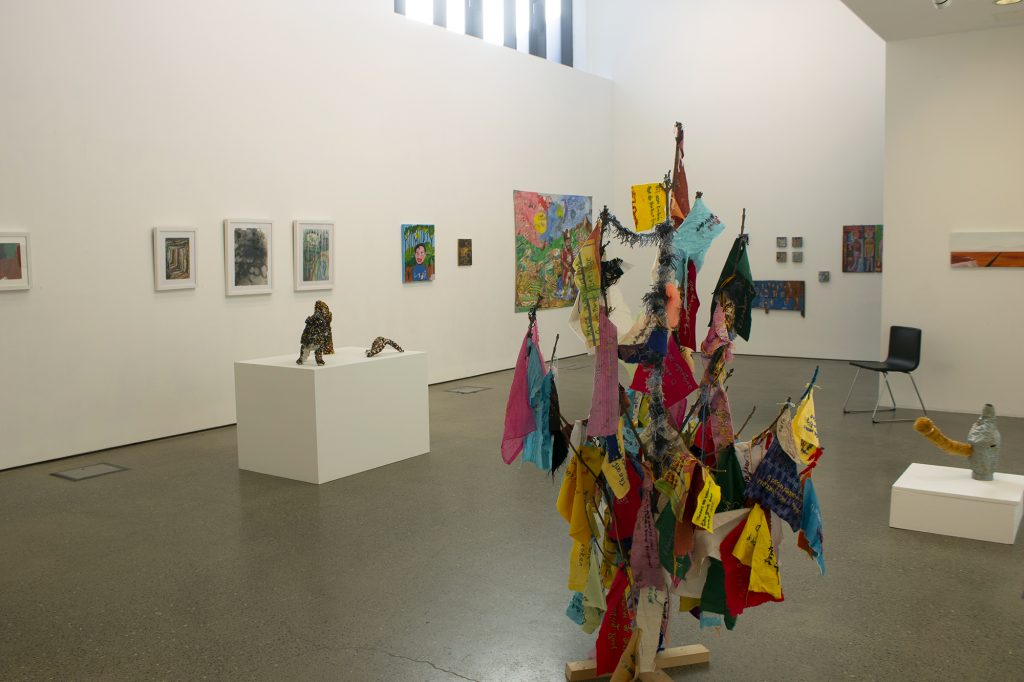 The Engagement Symposium was held over two days, 25th and 26th October 2018. The purpose of the Symposium was to explore the Project to date, creating spaces for presentations from keynote speakers and open dialogue between artists and people working in the arts with a focus on inclusion. The Symposium programme was carefully considered to allow for knowledge sharing, presentations, discussions and conversations. Time was given for attendees to move between spaces for speaking and spaces for making and creating. There were also designated places for sharing food and places for connecting in diverse ways with each other.

Alongside the addresses from speakers, voices from the larger group added lateral opinions and experiences, creating a rich thought space and ground for building new perspectives. Artists and administrators contributed to thoughts on curation, funding, mentoring, cultural democratisation, professional vs non-professional definitions and much more. Questions were raised and left open-ended for reflection. The open space and permeability of the KCAT main room in which these thoughts were voiced epitomised the essence of how the project can be described. The Engagement Project is a body which holds and supports, allowing for diversity, the unexpected, the organic process of a multitude of different ways of making art (Alice Bennett: Education Coordinator and Researcher). 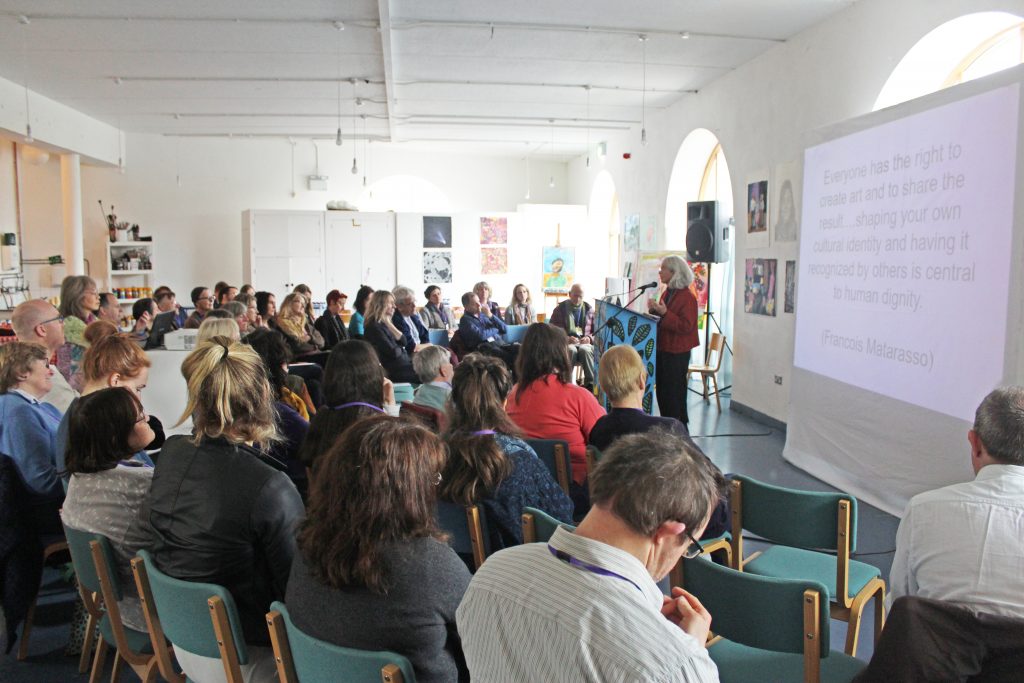 The half-way point of the Engagement Project was marked by a group exhibition ‘Courtship’ at the Glasshouse Gallery in Kilkenny in 2016. Like all courtships, this one is about getting to know each other, about each artist becoming familiar with often different ways of working, even with different backgrounds and cultures. Like more traditional courtships too, it is about wanting to share, learn from each other, find whatever it takes to make the relationships work. This has led some of the artists to work in pairs and others to formless specific ways of interacting, curating each other’s work, corresponding across continents or from studio to studio or
just visiting and talking. 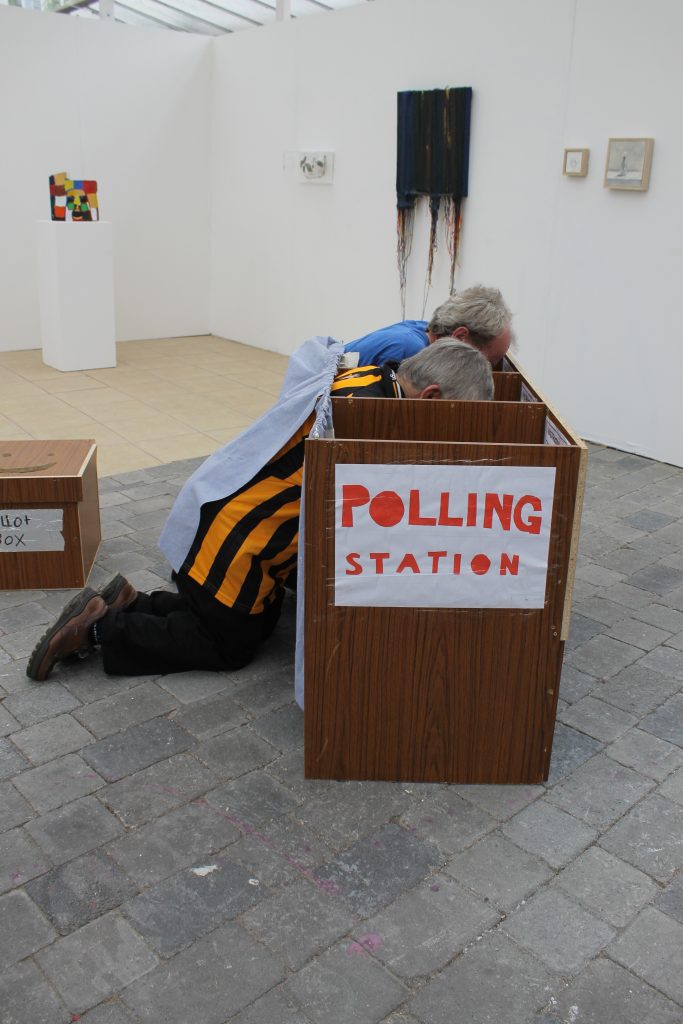 Andrew Pike and Nevan Lahart performing at the exhibition. 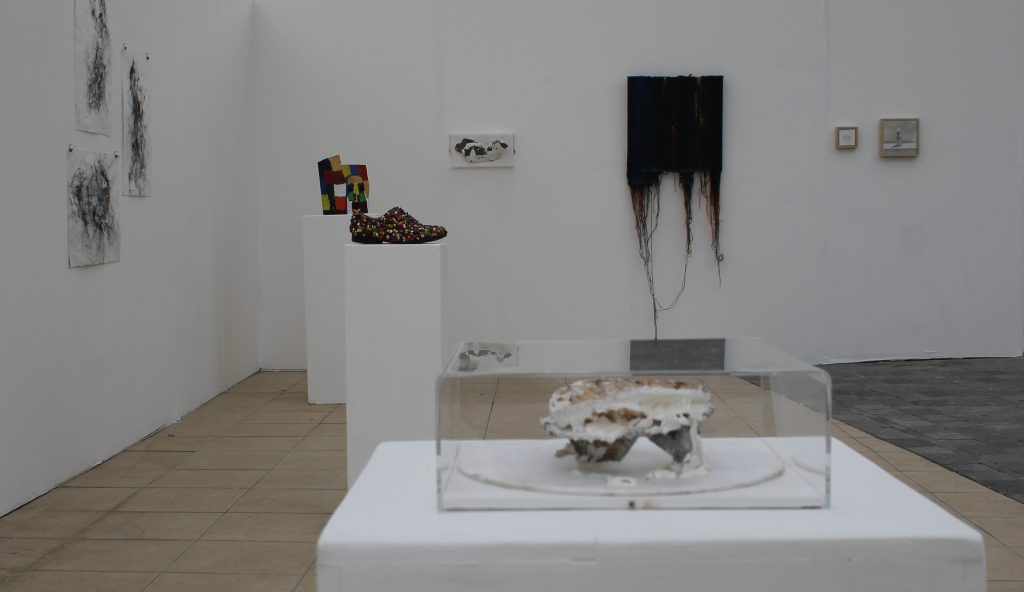 Overview of the exhibition at the Glasshouse Gallery.

The ‘Engagement’ project was launched officially by Catherine Marshall on Friday, July 4th, 2014, as described above the project will involve a coming together of creativity and curiosity, where artists will work alongside each other in whichever way they choose. The launch coincided with the opening bout of collaboration with a stunning exhibition of work by Mary Cody and Paul Mosse, as they begin their journey within ‘Engagement’.

Paul Mosse and Mary Cody have been making their own artwork for many years. They are both artists who struggle to find the truthful expression of their experience of the world. Paul is a familiar figure with work in the main public and many of the private collections in the country, while Mary is relatively unknown but no less dedicated and prolific. Neither artist takes the easy route to success or public recognition.  Despite considerable critical success at important early stages in his career, Paul Mosse opted to challenge both himself and those who admire his work by making artwork that defies definition as painting or sculpture, as much as it challenges simplistic optimism about modernity and the future of the planet. Mary Cody’s work, on the other hand, emerged from the supportive and encouraging background of the KCAT studio. She shares with Paul a fascination with the natural world and how that world was constructed.

Not content to rest on what they have already achieved each artist is constantly looking in new directions. While Paul’s work has moved off the wall and onto the table or even the floor, Mary, having seen his work, reached for new materials, in her case balls of wool, to create a new structure for her paintings, which increasingly spread and flow, floorward, spilling down from the canvas support, into the world beyond. For his part, Paul is interested to see where the solid clusters and blocks of paint residues from Mary’s work will lead to from here, if not in her work, then perhaps in some subliminal way in his. 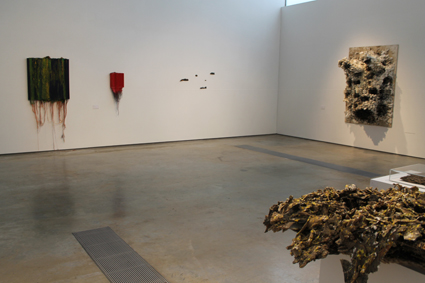