In response to Shakespeare’s Sonnet 19, Fergus Fitzgerald has created a unique response though painting and text.  The strong visual imagery echos the Sonnet which Fergus overlays with text including his own reflection on time.

Devouring Time, blunt thou the lion’s paws,
And make the earth devour her own sweet brood;
Pluck the keen teeth from the fierce tiger’s jaws,
And burn the long-lived phoenix in her blood;
Make glad and sorry seasons as thou fleet’st,
And do whate’er thou wilt, swift-footed Time,
To the wide world and all her fading sweets;
But I forbid thee one most heinous crime:
O, carve not with thy hours my love’s fair brow,
Nor draw no lines there with thine antique pen;
Him in thy course untainted do allow
For beauty’s pattern to succeeding men.
Yet, do thy worst, old Time: despite thy wrong,
My love shall in my verse ever live young. 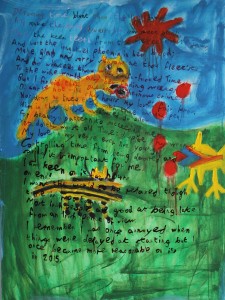 Controlling time from being devoured and

saving it is important for me.

I am keen on it for hours

I want the world to be relaxed though

Most Irish people are good at being late

from an Irish point of view.

I remember I was once annoyed when

things were delayed at starting but I

once became more reasonable on it